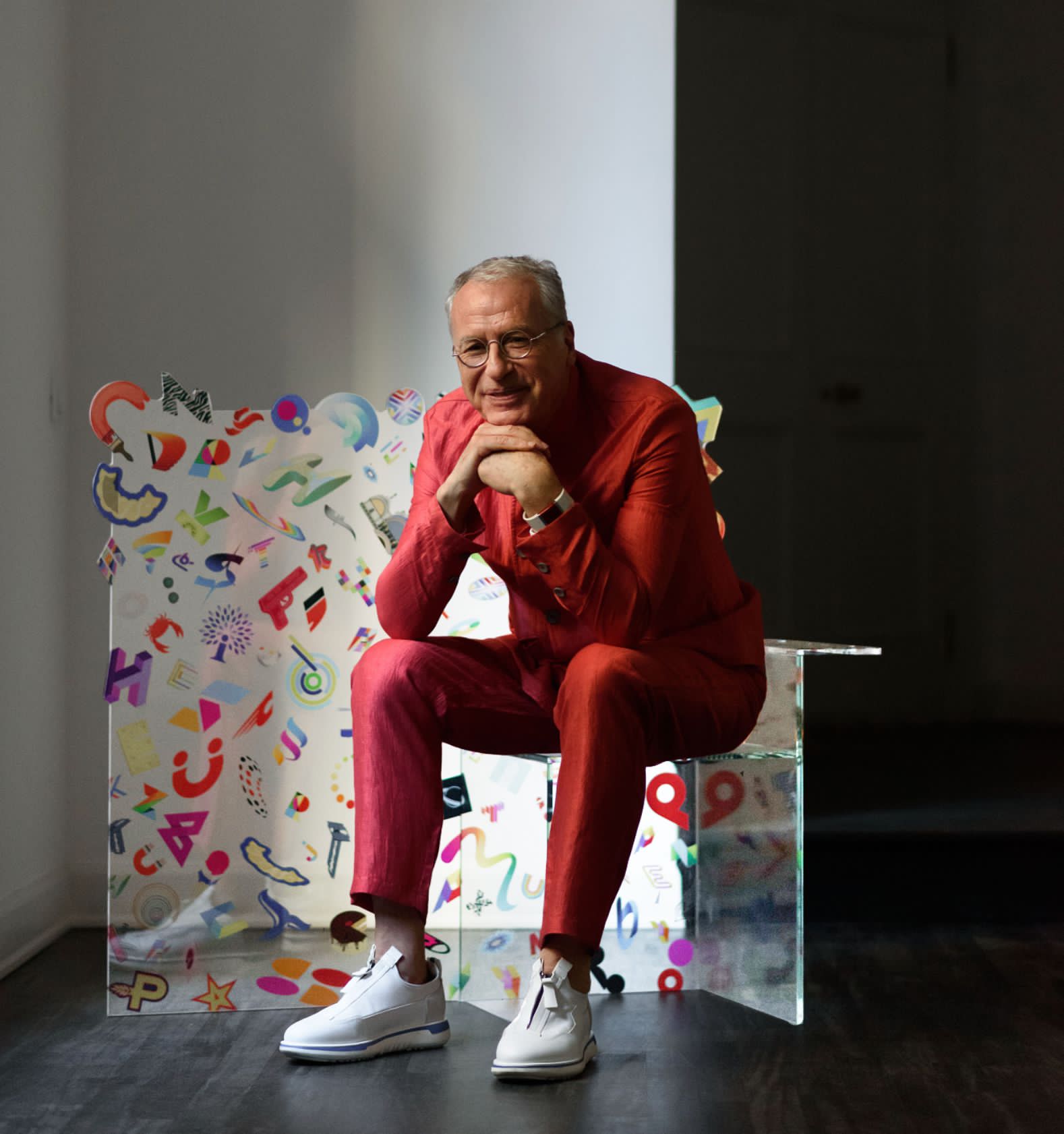 Lorenzo Marini – ’Seat or Read?’: A Painting Which Became a Crystal Armchair

Until the 4th of July  2022, Gracis Gallery in Milan hosts  ‘Alphatype2022’ exhibition, featuring twenty works by Lorenzo Marini documenting the last ten years of his artistic activity.  Hence the creation of a new visual context that frees language by bringing to light perceptual and psychic experiences realized in sign, verbal or graphic experiences. Lorenzo Marini is a multidisciplinary artist who lives and works both in Milan and New York. Over his artistic past he expressed himself through painting, directing, writing and design, as in his latest work, entitled ‘Seat or Read?’, among the protagonists of this exhibition.

‘Seat or Read?’ is a crystal armchair that combines rigidity and rationality, balanced by lightness and a sense of absence made thanks to the transparency of its material. This work’s main element is about inserting a pattern of letters, obtained from colorful shapes and items. His letters are not for reading or writing, they are visual interpretations of every single abstract sign that the letter represents. They are illustrations, emoticons, logos without brands: they don’t line up and don’t have to be decoded, but they just have to fly free in space.

“The idea of taking a painting of free letters and turn it into a backrest, also adding a crystal cube either as footrest and small table, seems to me an unconventional and lateral thought.” _ affirms Lorenzo Marini. “I believe that our lives are full of hard sides and I liked to create this armchair mostly to tell about lightness, about our need for fun and joy. The name ‘Seat or Read?’ invites you to make a choice, either you sit or read. Works of art must be immersive and should come out of two-dimensional spaces in order to turn into an experience. The material I chose is crystal, a typical peculiarity of Santambrogio Milano, because it represents two fundamental themes: lightness and sustainability. My architectural studies are necessary to my work as an artist and creative. Architecture is on an everlasting acrobatic balance between literature and engineering. Art instead is on a steady balance between logic and fantasy. On this chair the square backrest formal strictness merges along with the eccentric and colorful rain of letters. They seem to belong to distant worlds, but looking at them together you discover harmony instead.”_ he concludes.

Starting from July, ‘Seat or Read?’ it will be also available in New York, Miami and Los Angeles.

Lorenzo Marini is an Italian artist who lives and works in Milan, Los Angeles and New York.

After his artistic studies and a degree in Architecture, in 1997 he founded Lorenzo Marini Group, an advertising and communication agency with offices in Milan, Turin and New York. In his career as art director he was awarded over 300 National and International awards. A multidisciplinary artist who devoted himself over the years to several activities: from cartooning to directing and from painting to writing.

In 2016 Marini has an artistic intuition that leads him to celebrate the beauty of letters so he founded the “Type Art” movement and baptized at Palazzo della Permanente in Milan: this led him to exhibit at the 57th Venice Biennale in 2017.

In 2017 Lorenzo Marini was awarded the Art Advertising Award, a prize introduced at the 11th edition of the NC Awards.

The AlphaCUBE installation presented for Milan Design Week 2019 by Ventura Projects is exhibited in Venice on the occasion of the 58th Art Biennale, then in Dubai and finally in Los Angeles.

In 2020 he won the Mobius Awards in Los Angeles, an International competition award for the creativity of the new alphabet he created, the Futurtype. In the same year he presented the new cycle of his works Typemoticon on the occasion of his solo show “Out of Words” at Gaggenau Hub in Milan.

In 2021 his anthology in Siena “Di Segni e Di Sogni” was awarded as the most visited contemporary art exhibition of the year, reaching 50.000 visitors. In 2022 the personal exhibition “Olivettype” at the former headquarters of Olivetti, now Unesco heritage in Ivrea.

In June 2022, the Gracis Gallery in Milan hosts the “Alphatype2022” exhibition which reports the artist’s last ten years of activity.